Richard E. Davis, MD, FACS graduated magna cum laude from the University of Georgia in 1981 with a Bachelor of Science in Chemistry. Two years later, he received a Master of Science in Molecular and Population Genetics from the same institution. In 1987, he earned his M.D. from the Medical College of Georgia, graduating with honors in research and a special commendation for outstanding achievement on the National Board Examination. In 1992, Dr. Davis completed post-graduate training in Otolaryngology (Ear, Nose, and Throat Surgery) at the University of North Carolina (UNC), one of the nation's top Otolaryngology programs. As a junior resident, his research in three-dimensional imaging of facial and cranial birth defects received first place honors from the Triological Society's Southern Section, a research competition open to all Otolaryngology residents throughout the southeastern United States. As chief resident, Dr. Davis also received the UNC Womack Surgical Scholarship award for "excellence in teaching, research, and patient care" — a distinction reserved for the top graduating surgeon at UNC among all surgical specialties. In 1992, Dr. Davis began training at Oregon Health Sciences University, one of the nation's most respected Fellowships in Facial Plastic and Reconstructive Surgery. Later that year, he also won the Harold Delf Gillies Research Award for his work in wound healing. 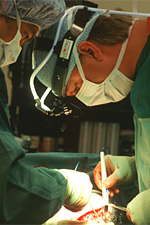 In 1993, after 6 years of post-graduate surgical training, Dr. Davis joined the full-time clinical faculty of the University of Miami (UM), School of Medicine. By 1999, he was promoted to Associate Professor and appointed Division Chief for Facial Plastic and Reconstructive Surgery. One year later, he was also appointed Director of the University of Miami / Jackson Memorial Hospital Fellowship in Facial Plastic and Reconstructive Surgery. During his nearly 15 years at the University, he garnered numerous awards for teaching and clinical medicine and personally trained scores of young surgeons in the art and science of facial plastic surgery.

In 2007, Dr. Davis retired from full time academic medicine and founded The Center for Facial Restoration, where he currently serves as the medical director. Although now in private practice, Dr Davis remains active in the teaching of facial plastic surgery at the state, national, and international levels and continues to serve as Director of UM’s Fellowship in Facial Plastic and Reconstructive Surgery, as well as Voluntary Professor of Otolaryngology. He is board certified by both the American Board of Facial Plastic and Reconstructive Surgery (ABFPRS) and the American Board of Otolaryngology (Ear, Nose, and Throat Surgery) and has served as an Oral Board examiner for both organizations on numerous occasions. Dr. Davis is presently a Fellow of the American College of Surgeons (FACS), American Academy of Facial Plastic and Reconstructive Surgery (AAFPRS), and American Academy of Otolaryngology. After serving a four-year term as Southern Regional Director for the AAFPRS Board of Directors, Dr. Davis was recently elected to serve as Vice President of Education for the AAFPRS and its educational foundation, beginning in Fall 2015. Dr. Davis is also a member of several other respected medical, surgical and professional organizations.

Davis RE, Wayne I: Rhinoplasty and the Nasal SMAS Augmentation Graft: Advantages and Indications. Archives of Facial Plastic Surgery, 6:124-132, March/April 2004.

Davis RE: Diagnosis and Management of Perilymph Fistula: The University of North Carolina Approach. American Journal of Otology, 13(1):84-89, 1992.

Other Works and Publications